Migration and habitat selection are two crucial aspects of the ecology and behavior of migratory birds. In order to understand these aspects of migratory bird biology, long-term monitoring of individuals across the entire annual cycle is required. GPS telemetry can be used to study long-distance movements (migratory patterns) and fine-scale movements (habitat selection) in birds. Even though this technology has been rapidly advancing over the past decade, transmitters have only recently become light enough to attach to small birds. While most people don’t often consider raptors “small birds”, from a telemetry perspective many species are.

Northern Harriers (Circus hudsonius), weighing in at only 350-400 grams for males, and 500-600 grams for females, might look large due to their long wings but are actually on the smaller side of raptors. Until recently, Northern Harriers have been too small to carry the latest GPS transmitter technology that has been used to reveal fine-scale movements of many larger bird species. Northern Harriers are also an incredibly understudied species, despite being a ubiquitous raptor in marsh and grassland ecosystems across North America. The vast majority of our understanding of the ecology and behavior of harriers in North America comes from research on the Hen Harrier (Circus cyaneus) in the UK, of which Northern Harriers were once considered a subspecies. With the recent split of the Hen and Northern Harrier, we now know even less about our North American harriers than we once thought.

The Golden Gate Raptor Observatory has been studying raptor migration for over 30 years along the Pacific Coast and their data have revealed that harriers are rarely detected along coastal migratory routes. These data, coupled with abundant harrier sightings in the Central Valley year-round, lead me to believe that either: 1) alternative routes are used during migration with different breeding and wintering populations moving throughout California, or 2) harrier populations are largely resident. In order to understand their migratory behavior, including discovering important stop over locations, migration timing, and habitat selection across migration, breeding and wintering seasons, I am using 14 gram GPS/GSM transmitters (Ecotone, CREX model) attached to female harriers. These transmitters record GPS locations (5-10 m accuracy) and transmit locations via text message through the GSM cellular network.

To determine if harriers in California are migratory or resident, or if wintering and breeding populations differ, we captured 10 adult females in the winter (December-February) and five adult females in the breeding season (May-July) in Suisun Marsh, California. We also attached transmitters to nine fledgling female harriers to compare juvenile dispersal and movement to that of adult females. Suisun Marsh is the largest brackish water marsh on the West Coast, and once held the largest breeding population of harriers. As such, there is a large source population of harriers to study across both seasons.

What we have learned so far:

Of the 10 marked wintering females, eight transmitters have worked consistently enough for data collection. Of these eight females, seven migrated north, one migrated south, and all bred outside of Suisun Marsh. Only two females bred within California, with one female breeding on Mendota Wildlife Area in the San Joaquin Valley, and the other female breeding on Modoc National Wildlife Refuge (NWR) in Northeastern California. Three females bred in Oregon; two on Malheur NWR and one on the nearby Hart Mountain NWR. The sixth female bred in a wheat field in Washington. And the seventh female bred in sagebrush habitat at 5,700 feet elevation in Idaho. All seven females flew between 125–600 miles across 3–15 days, one way, during their spring migrations.

The biggest surprise came when the eighth female, named Blanca (for her very light yellow eyes; pictured to the left), who disappeared from Suisun Marsh on April 1st, 2018 appeared in British Columbia on April 10th after a period of radio silence. Blanca’s movements were fast and seemingly with a purpose, making it obvious that she was a long-distance migrant. After hitting some weather near Fort St John, BC, Blanca looped into Alberta and back down into Washington where she remained for 10 days before continuing north. After making her way to Anchorage, AK by May 19th, we said goodbye to our international migrant as she left cell coverage headed for the arctic. It wasn’t until early August when Blanca reappeared in British Columbia, transmitting a backlog of all of her two-hour locations from May. Blanca nested well within the Arctic Circle in tundra habitat, then nearly reaching the Arctic Ocean on her return migration south. Since then, Blanca has made her way down to the Washington-Oregon border where she has, once again, gone silent. In total, Blanca has flown over 7,000 miles to and from her arctic breeding grounds in the longest distance migration ever recorded for a Northern Harrier! Her migratory route has also been the most complete that we’ve recorded for any of our wintering harriers.

So far, our data reveal that wintering and breeding females are, indeed, from different populations. Additionally, wintering females have revealed important patterns in harrier migration: 1) harriers migrating north through the Central Valley move into Northeastern California and beyond by way of the 299 corridor into the Fall River Valley, similar to migrating waterfowl, 2) harriers use wildlife areas and national wildlife refuges with flooded marsh habitat as stop over locations along their migration, and 3) harriers breed in a variety of habitats, ranging from emergent marsh vegetation, to sagebrush, to the arctic tundra! Furthermore, so far one female harrier has returned to Suisun Marsh in the exact same location where she wintered and was captured the previous winter, revealing possible site fidelity among wintering birds. Other wintering females have yet to complete their fall migrations, but I believe they, too, will return to Suisun Marsh or nearby areas.

Breeding females and fledgling birds have been remaining in or near Suisun Marsh, for the most part. Fall migration isn’t over, so it’s possible these birds will be on the move soon, or they will remain local throughout the winter.

While the advances in transmitter technology that have enabled this project to happen have been exciting, the reality of using solar-panels to charge batteries and GSM cell networks to transmit locations is that transmitters do not always function the way they are meant to. Feather coverage and cloudy weather result in low battery levels, and birds that travel outside of cell tower range do not transmit data. As such, several transmitters have not functioned since attachment, and several more are only able to record GPS locations once per day.

Fortunately, new transmitters with more efficient solar panels and GSM/GPRS/3G capability (for better cell network coverage) just hit the market in 2018 (Ornitela, OrniTrack-10 model). Additionally, these new transmitters now weigh only 10 grams, making them small enough for both female and male harriers! With these new transmitters in hand, I plan to deploy more on wintering, breeding and fledgling birds this upcoming winter and next breeding season with the hope that we will be able to collect more consistent, fine-scale movement and habitat data. Stay tuned! 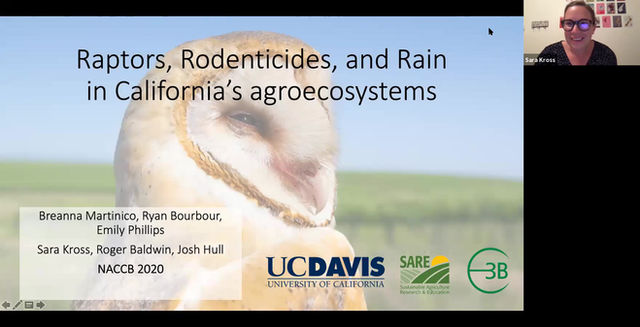 Messy talons and beaks can tell us what a raptor eats

Project overview: Working with farmers to enhance natural pest control on their land